Should I answer questions at the Police Station?

What are my costs going to be?

How should
I plead?

How we select a barrister for you

Do I need a lawyer with me at the Police Station?

How can you defend a guilty person?

What kind of Service can I expect?

Solicitor for a Second 2nd opinion

Auorised & Regulated by the Solicitors Regulation Authority (No 106238)

Stuart Wavell meets the solicitor the seriously troubled seek out in a crisis.

You've been nicked, the filth are crawling all over your Axminster carpets and you could be looking at more porridge than Oliver Twist ever dreamt of. Who do you call? You're not boracic lint - skint - and you can afford the best. Which legal brief can do the business for you? There is only one choice for discerning clients such as captured fugitive Kenneth Noye, John "Goldfinger" Palmer and a raft of others who have experienced serious misunderstandings with the law. Their preference is a genial, cigar-smoking solicitor named Henry Milner, who operates with mole-like discretion from an office tucked away in London's jewellery centre of Hatton Garden.

Journalists have been ringing him non-stop since Noye was arrested in Spain last weekend in connection with the "road rage' killing of Stephen Cameron. "I don't answer half of them," he said. "You're the first I've seen." He then confounded his Trappist reputation by talking with zest and humour about his twilight world of meeting gangland criminals, turning around hopeless cases and the old police practice of "verballing up" suspects with false confessions. "It's a lot of fun defending criminal cases," he declared. Milner, the product of a north London upbringing, a Jewish boarding school in Oxfordshire and the London School of Economics, is a rare bird in the legal fraternity of serious crime - a one-man band offering an exclusive service to 10 or 12 rich clients a year. "Keeping it small results in a personal service," he said. "I think the service suffers in the larger firms that deal with legal aid work, which I try to avoid. Virtually all my work gets passed on by word of mouth."

Milner's breakthrough into the big time of high-profile criminal cases came soon after he set up his first office above a restaurant in Wigmore Street in 1978. "I had one very good client who appeared at the Old Bailey as regularly as Frank Sinatra at the Albert Hall, six years in a row. He was a lovable rogue, and by some miracle he was continually acquitted. He used to recommend people and so a lot of cases fell into my lap."

When the £26m Brink's-Mat heist came along in 1983, Milner was sitting pretty to receive a windfall of clients. First there was Mickey McAvoy, who got 25 years for the actual robbery, and Tony White, who was acquitted. Then there was Noye, who was acquitted of murdering a policeman. These were followed by other Brink's-Mat "handling" cases - including John Fleming (no case to answer) and John Palmer (acquitted). Milner also represented the Arsenal footballer David Hillier, who pleaded guilty to the theft of a businessman's luggage in July 1996.

Were there any cases he would not handle? Milner frowned. "It's a very difficult question, because I do a lot of cases the public finds distasteful, like drugs. But I have never handled cases involving sexual offences on elderly people or young children."

Okay, say you are facing a long stretch and you go to see Henry at his first-floor office, squeezed between two jewellery shops. You are greeted by Eileen, his cherished secretary for 23 years, who shows you into a small waiting room where you peruse copies of BMW, Red and Wine magazines. Ah, there's Henry, ushering you into his panelled room and selecting a cigar from a walnut veneer box crafted in a prison workshop and sent to him by a grateful client.

What is Milner feeling? "You've got to look confident even if you don't feel it. If you show a weakness or fear they will jump on it. Defendants are as shrewd as anything. They know whether you are on the ball." One question preoccupies their thoughts. " 'What are my chances?' they ask. It's best to be straight with a client. You start with 'hopeless', 'very, very poor', 'relatively poor', 'under 50%', 'evens' or 'quite good'. If you put it above 'good', you're in trouble if they are found guilty."

Milner leans back and roars with laughter, then adds: "You can't guarantee anyone winning a case any more than love comes with a guarantee." With 25-year sentences for serious drug offences, he has a harder job persuading defendants to plead guilty for the sake of a few years' reduction. The end of the tunnel seems impossibly distant, he says. The trouble is, the best estimates can be wrong.

"We had a case of an Iranian who was charged with possessing 100 kilos of heroin. In my view, the case was absolutely hopeless and had he received 18 years, he would have done well. We begged him to plead guilty but he wouldn't hear of it. When we got to court, it just fell our way."

Popular fiction and films have nurtured the idea that criminals can get too cosy with their lawyers. How pally does Milner get with "chummy"? It is a criticism that he has been confronted with in the past. "I don't have a close relationship with my clients," he replies. "I don't go out at night with clients. I don't go to pubs with clients. If I'm preparing a case I might go and have a snack with them at lunchtime, and that's it."

There was more tension with police in the days when solicitors could be excluded from interviews and defendants could be "verballed up" with false confessions. Milner recalls an uneducated young client, arrested for conspiracy to rob, who had supposedly stated: "It looks bad, but so did Dunkirk, and we managed to wriggle out of that."

Suspecting the boy knew nothing of the Dunkirk evacuation - "he knew where Rotherhithe was, but Dunkirk?" - Milner obtained his school report, in which the history teacher wrote: "If your son had attended any of the lessons, I would be able to tell you whether he knew any history." Then he discovered the policeman who recorded the comment had been in the army. "The barrister turned the whole case into a joke."

So what makes Milner run? The thrill of winning against the odds, reflected in a passion for bridge, he says. It's fun . He's his own boss, with no frowning partners if he takes the afternoon off to indulge his enjoyment of traditional American music or Tottenham Hotspur.

Milner's personal service means keeping hold of the reins during a case, helping to decide which witnesses to call, influencing a counsel's closing speech and occasionally putting his foot down. He attributes his success in large measure to picking top barristers with a knack of winning. Too impatient with long-winded barristers to practise advocacy himself, he prefers the quick hit of bail applications before a judge. "I had a case once where the judge said he was going to adjourn his decision on bail for a few weeks. I said, 'I'll tell the prison governor that the order of the court is that the prisoner's bed should be relocated to allow him to sleep with his head outside the prison and his feet inside.' To which the judge said, 'That's fine, as long as his feet are handcuffed.' "

An amusing thank-you card received
from a grateful client.

Sherlock Holmes knows a top criminal solicitor when he sees one, so makes his way to the Henry Milner & Company Solicitors offices! 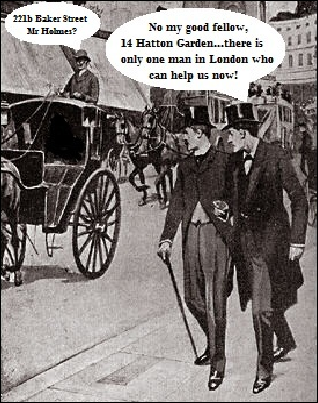 Back to Top London Criminal Solicitor - All Areas of Expertise